Don’t Look Back: The Legend of Orpheus, or Shark, or wow that was a lot 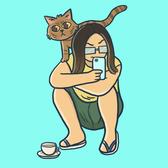 I've been thinking about what this newsletter is supposed to be. I started it with no idea and no rea